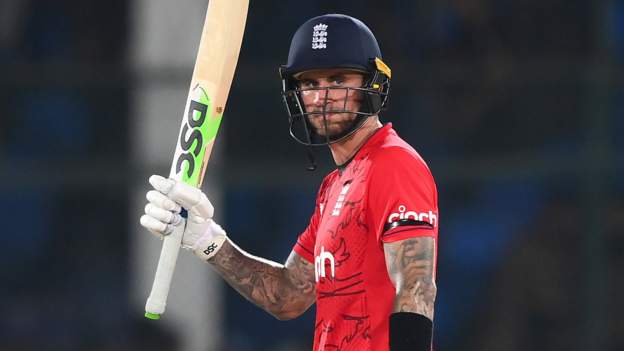 The returning Alex Hales hit 53 and debutant Luke Wood took 3-24 as England claimed a six-wicket Twenty20 win over Pakistan in their first game in the country for 17 years.

Chasing 159 to win, Hales hit seven fours in a controlled and mature knock in his first England appearance since 2019, when he was dropped from the World Cup squad for off-field issues.

His fifty gave England a platform for victory, with Harry Brook making 42 not out off 25 balls in just his fifth T20 to guide the tourists home with four balls to spare.

Earlier Pakistan made 158-7, with Mohammad Rizwan striking 68 from 46 balls, while opening partner and captain Babar Azam added 31 off 24.

Wood was supported by Adil Rashid, who took 2-27, including the key wicket of Babar with a brilliant googly to end an 85-run opening stand.

The match was England’s first in the country for 6,118 days, since a Test and one-day international tour in December 2005.

No countries toured Pakistan for six years after an attack by gunmen on the Sri Lanka team bus in 2009, with sides returning sporadically since 2015.

England were due to tour last winter, but withdrew after New Zealand’s men abandoned their tour of Pakistan because of a security threat.

The second game in the seven-match series, which is a build-up to the T20 World Cup in Australia in October and November, is on Thursday at 15:30 BST. 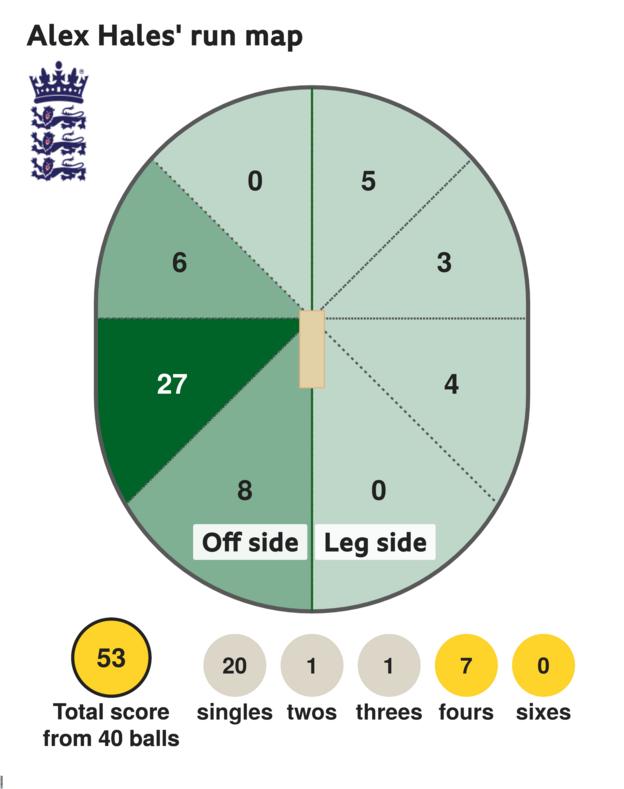 Hales has admitted he thought his chances of playing for England again may have gone during his three-year exile, but a loss of form for Jason Roy and a serious leg injury to Jonny Bairstow has presented the 33-year-old with another opportunity.

His knock combined power, touch and excellent placement as the right-hander latched onto any width, dropping deep in his crease to cut to the off-side boundary on numerous occasions.

He was dropped on 28 by Shan Masood after miscuing a slog-sweep, but made the most of his reprieve, and was frustrated when he chipped to cover the ball after reaching his fifty, with England just needing 17 to win.

“It’s a very special feeling to get back out on the park for England – three years felt like forever but to get a fifty on my return in a winning team is the stuff dreams are made of,” said Hales.

“There are always nerves and pressure after having not played for England for three years, it felt like a debut again, so a very special night.

“I’ve spent a lot of time in Pakistan over the last few years and it means a lot to me so to be part of the first England tour here in such a long time is an incredibly special feeling.”

Hales shared 34-run partnerships with Trent Rockets team-mate Dawid Malan and Ben Duckett, playing his first T20 since 2019, but the telling partnership was the 55 he put on with Brook.

Yorkshire’s Brook, 23, had shown glimpses of his talent in his first four games without a particularly telling contribution and started patiently here before targeting Shahnawaz Dahani in the 15th over.

The tourists needed 52 from 36 balls but Brook ramped the first ball for four, before two more boundaries followed, as the game swung firmly in England’s favour.

The next over went for 13, including a gorgeous straight drive over mid-off by Brook, and despite the wicket of Hales, Brook and stand-in captain Moeen Ali saw England over the line. 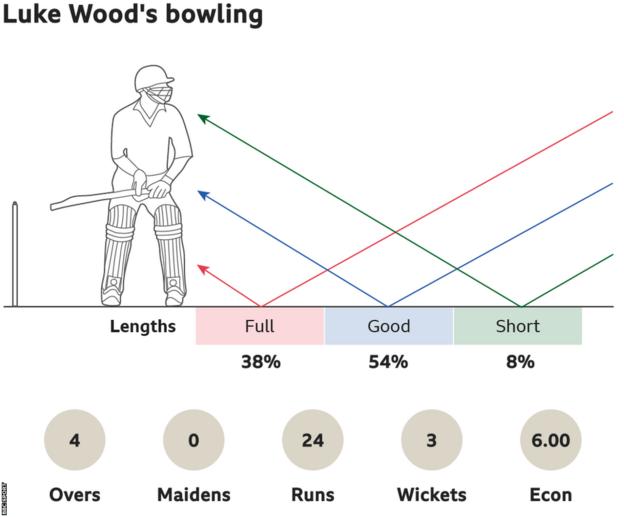 England touring Pakistan is significant. The tourists are a cricketing powerhouse, and, aside from India, they are the nation that the hosts would have most wanted to return.

The players walked out to a boisterous crowd, after a minute’s silence for flood victims in Pakistan and Her late Majesty Queen Elizabeth II, with many using their phone torches to create an amphitheatre of light.

It buoyed the hosts, with Rizwan and Babar attacking England from the off and racing to 85-0 after 9.2 overs, before Rashid dismissed the latter.

From that moment on England fought back, able to apply pressure with tight lines and a faultless fielding performance.

Wood, 27, has been a success of The Hundred for Trent Rockets, with his performances in the competition accelerating his progress after impressive T20 Blast campaigns for Lancashire, and on this evidence he is going to have no issue settling into the international arena.

His first wicket saw him rip Mohammad Nawaz’s off stump out of the ground, before he had Iftikhar Ahmed and Naseem Shah caught in the deep in the space of three balls in the final over, his changes of pace and length proving effective.

England have fitness doubts over Chris Woakes (knee), Mark Wood (elbow) and Chris Jordan (finger), all three of whom have been named in the 15-man squad for the World Cup, so others such as Wood – who is not in that squad – know they have a chance to impress.

‘Hales showed how good he is’ – reaction

England captain Moeen Ali: “A brilliant performance overall. We pulled it back well in the middle overs and at the death with the ball. Credit to our bowlers, they set it up for the batters.

“Luke Wood got crucial wickets for us. He was outstanding on his debut, stuck his chest out and bowled well along with Adil Rashid. It wasn’t easy for the batters coming in.

“We were smart with how we chased it down. Alex Hales showed how good he is, having come back in after a long time. Harry Brook showed a lot of confidence and that looks great for the future.”

Pakistan captain Babar Azam: “How Rizwan and I played in the powerplay was very good. We stuck to the plan and afterwards England bowled well. There could have been a better partnership.

“England planned well and started the bowling off with some pace so we need to give them credit for that, but also our batsmen need to step up.”

England batter Harry Brook, speaking to Sky Sports: “I have a little bit of experience from the Pakistan Super League and tried to keep the ball along the ground, and be here at the end of the game. The pitches here are usually low and skiddy.

“It feels very safe with the security. I have someone following me every time I go to the toilet!”

Eliud Kipchoge breaks his own marathon world record in Berlin 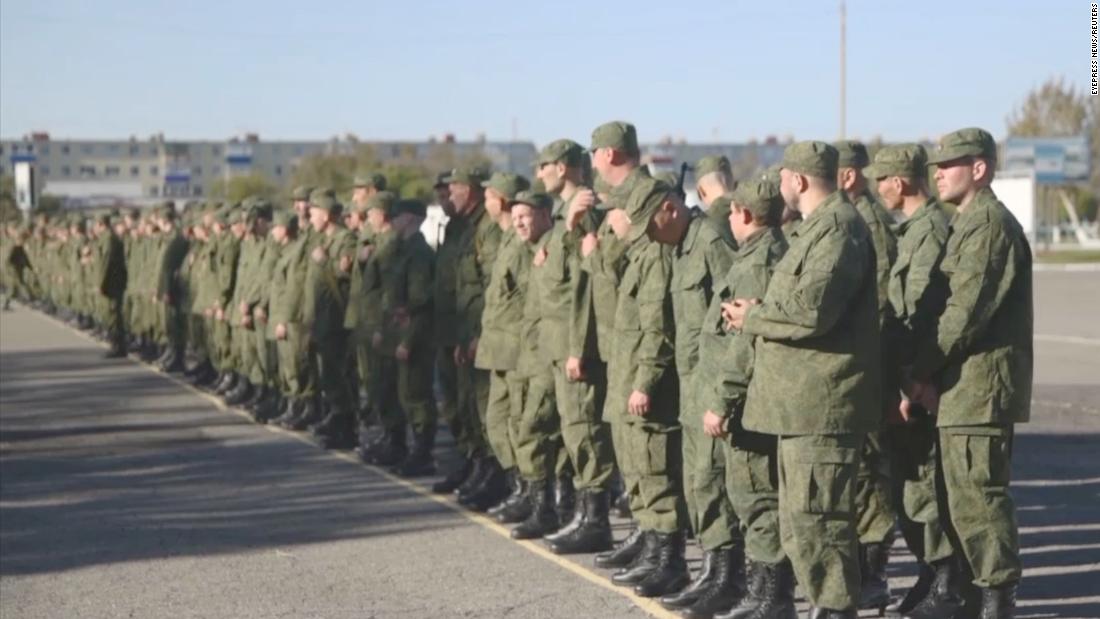 Protests, drafting mistakes and an exodus: Putin’s mobilization off to chaotic start